Well I'm hoping this will be the beginning of a fruitful relationship.  It's been six months since I last blogged anything; prior to this, I was rolling along at a good pace, regularly painting up pieces for an ever increasing Khorne warband and then I suddenly hit a brick wall.

This was the first case of a proper lost mojo in about seven years. I've had the odd week or two when I can't get into a project but not like this. It was probably down to a mixture of a work schedule over the summer that rapidly escalated out of control and one or two personal issues that I won't bore you with.
So a couple of months back, I decided to watch Ken Burns' Civil War masterpiece again. I'd first seen this with the old man back when it was first aired in the UK in 1991 when I was about 15. He was massively into the civil war and made me sit down and take it all in. I watched it again a couple of years ago but on seeing it again recently, it had an effect on me that I was not expecting. Total obsession! I've watched it about ten times in the past two months and don't feel like letting up yet either. I could go on all day about this documentary but this blog is about toy soldiers. The urge to paint returned and I looked around various civil war ranges and found that Dixon Miniatures were by far and above, the most characterful I'd seen. I'll go into them more in a sec but I thought I'd show a pic of what I've done first.

I've decided to tackle the Confederates first and have enjoyed using the varied grey palette. I'm managing about one figure a fault which is pretty good for me. What I'm particularly pleased with is that I've managed to paint every figure from my initial order. The plan was to not buy too many too soon and overwhelm myself but I threw caution to the wind and ordered a load more.

I have to say, I've totally fallen in love with this range. They are an absolute joy to paint and so full of character. I'm so impressed with the extensive detail to them with all the various heads that are available. I've managed to amass a small force of Confederates with every man being different. Plus there are about 400 different poses in the range. There are some really cool character models available too. The flag is from Redoubt Enterprises. 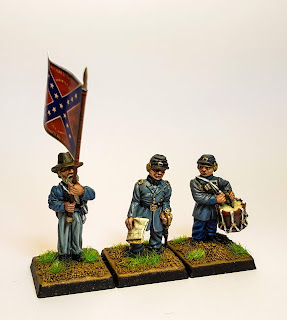 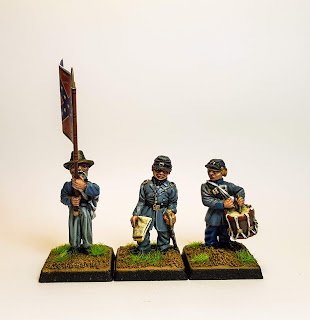 I'm still in my infancy when it comes to learning about the civil war and I know the rebs generally wore shell jackets over sack coats and I do have a mixture of both in this first unit but I'm not too bothered by all that. 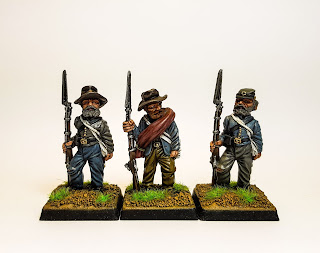 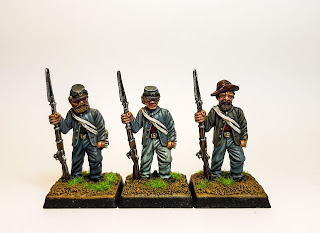 I've found a lot of inspiration and guidance from other historical blogs out there, in particular Tales From GHQ 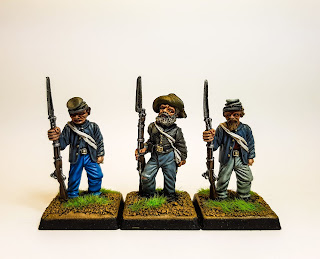 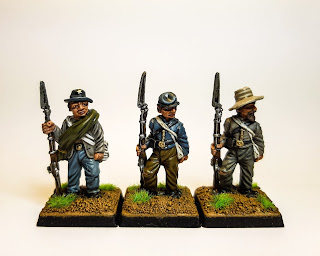 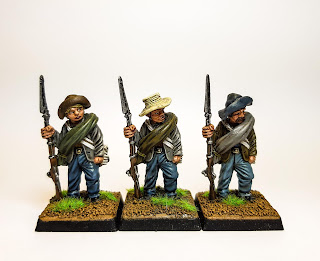 Hopefully this will be a project I can stick with for some foreseeable time. The desire is burning brightly and I'm already making a start on some Confederate cavalry which I'm hoping to post up in a couple of weeks. Bye for now!
Posted by Shaitan at 12:31