I didn't want to get too far into this warband project without painting its leader. This has proved a major headache and I had to scrap the initial plan of one of Jes Goodwin's Khorne Champions converted on a juggernaut. It was all going perfectly well until I had issues with the jugger colour scheme and wasn't happy with the opening stages of the champion. This is not the first time I have destroyed a perfectly good Realm of Chaos Champion;  I can think of at least EIGHT who have bit the dust over the years in attempts to convert into mounted characters. The mere thought of it makes me throw up in my mouth.
Anyway, in the end I went for this guy mounted on one of the three excellent Realm of Chaos steeds. 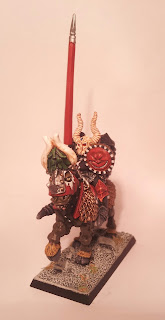 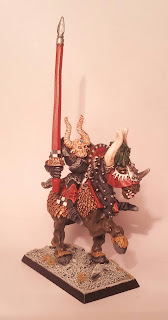 Part of me feels like I have wimped out with a slightly less ambitious creation. In fact, it has proved to be a bit of a ball ache all the way; various fuck ups hindering me as I toiled to get him painted. It feels like this whole warband project has been a bit of an ill-fated voyage what with endless figure selection problems (and I'm still not finished there) and numerous frustration. I hope this can change and I start enjoying this project like I was supposed to be. 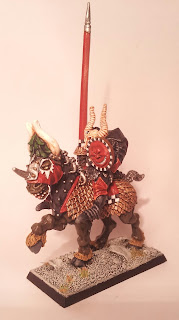 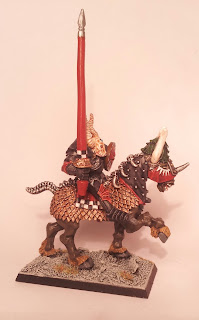 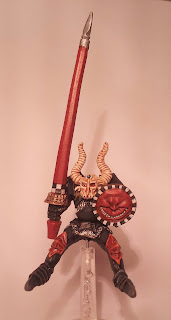 Once a Marienburger nobleman named Dirk van den Ruitenbach, he opted to walk the path of Chaos, changing his name to Torranga-Sama.
As yet, his rewards have been few; his Chaos Steed He'khar, mandatory Khornate armour and the power of regeneration but he has acquired a number of loyal followers; Thugs, Chaos Dwarfs, an Ogre, Troglodytes and the like. 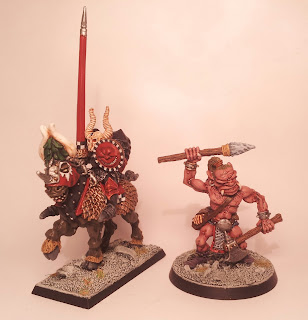 Torranga-Sama accompanied with an Ogre follower

So next up will be more of the Champion's retinue

Despite being weighed down with other projects I decided to make an effort with Orctober. I have to admit that a number of them were painted some time ago but I've taken time to modify them slightly and add a feel more. Unfortunately I haven't enough at present for a whole team but hopefully I'll sort that out in the future.


With my last Bratt ganger not quite finished, I have eagerly made a start on my next project a Chaos Warband which I'm planning on having completed by the end of the year.
After pondering briefly on which Chaos power to choose I opted for Khorne probably for the main reason that I already have most of their champions and daemons so it saves a lot of time and money hunting stuff down. 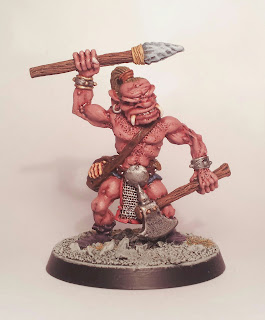 Up first is an Ogre armed with a flint headed spear and axe which is one of the three head variants (and my perosnal favourite of the three) from the AD&D range; a series of figures that I have sometimes tended to overlook, mainly because of limited catalogue appearances. 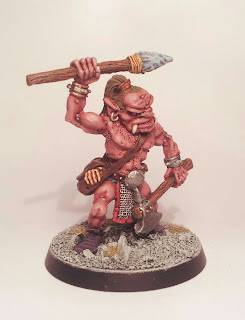 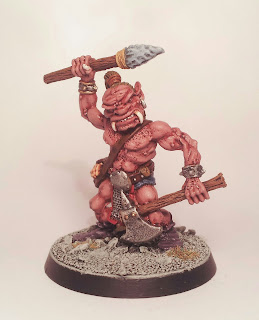 I think one of the beauties of painting a warband is that there is enough figure variation to keep one motivated without getting too bogged down with units all looking the same, getting bored, moving on to another project and leaving yet another one unfinished as we all can be guilty of that from time to time. 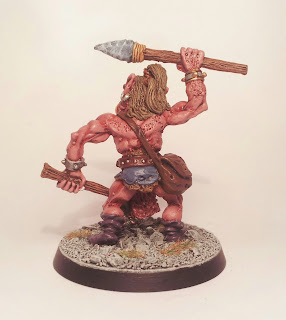 The next plan is establish some discipline in order to finish off that Bratt ganger, attempt to bash out something for Orktober and crack on with the next member of this warband, although I haven't decided on who yet; I'm still deciding on final ideas for the leader so it's more likely it'll be a follower or followers of some kind.
Posted by Shaitan at 22:17 No comments: