For me that is. An army I started way back in 1997  has been pretty dormant for some time, with the exception of the odd addition here and there.
I've had a fair amount of stuff lying in a box waiting for me to embark on a significant return to the project but until now I haven't had the full enthusiasm for it.

L to R: Vile The Twisted, Mighty Zog Arkwright and Gladstone The Large

So first up is something straight forward to ease back in; three Chaos Warriors. The guy in the middle was from the initial phase of the army and has been stripped. Now this isn't something I'm going to make a habit of; I just felt seeing as he's perhaps my favourite Chaos Warrior, he deserves a better paint job. 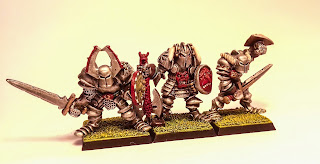 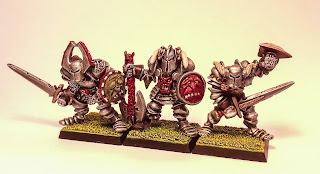 So expect to see plenty more chaos posts in the coming weeks, in particular something that has been distinctly lacking in the army so far. I wonder if you can guess what that is? 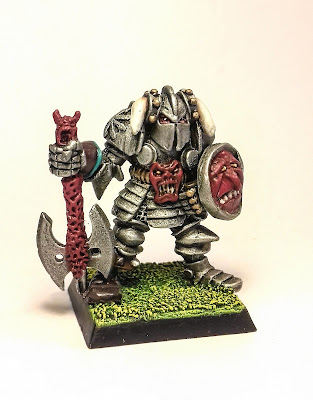 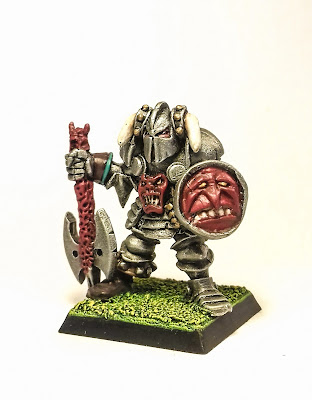 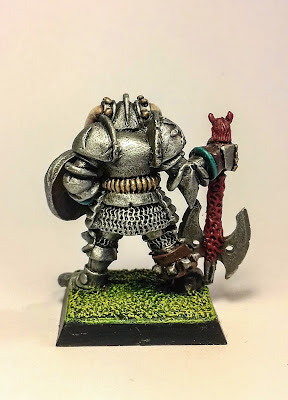 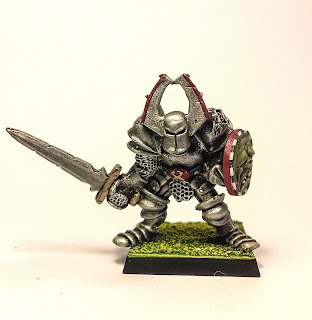 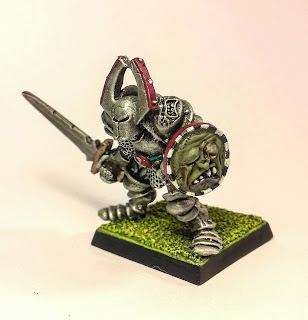 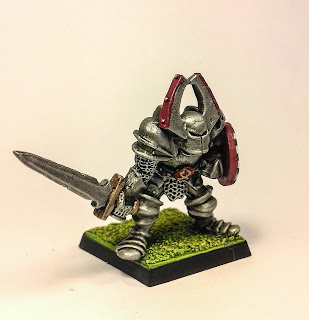 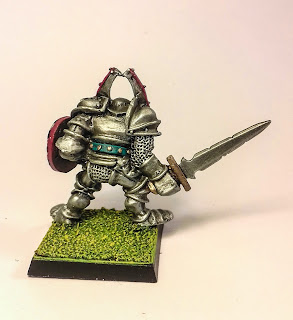 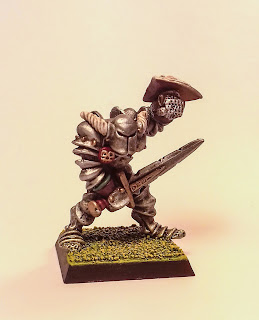 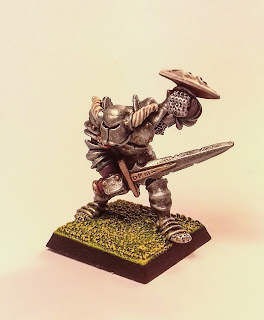 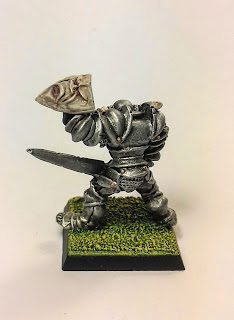 Incidentally, this blog had its third anniversary this week (yesterday in fact) so I'd like to say a huge thank you to all you people who have followed and commented over the past three years. It certainly provides me with the motivation to keep posting new material so I'm massively grateful for that!

So next up is the main man; the Helmawr Clan leader. Another limited release figure, this was a Jes Goodwin sculpt and in fact the second time I've painted him.
As you can see he's brimming with detail and is a complex and busy figure to paint. Having acquired a second copy of this sculpt, it's safe to say the first was definitely a recast as theasy second one in comparison is vastly superior in casting quality. 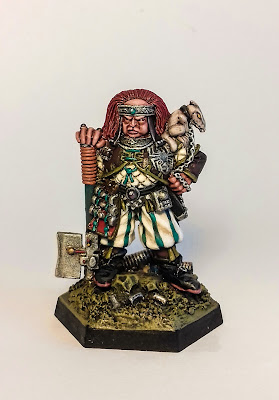 I said it two years ago and I'll say it again now, he's definitely one of my all time favourite figures so painting it required no room for error. 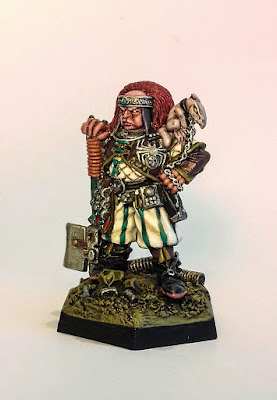 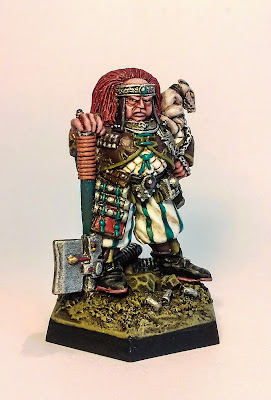 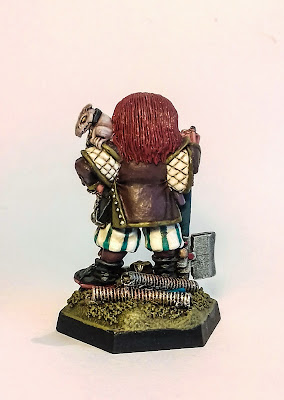 I'm really happy with the end result actually and equally satisfied that I now have a completed Confrontation gang, albeit a rather small one but hey, I ain't bothered. Plus I shall be taking these guys to BOYL 2017 where hopefully they'll be involved in some kind of game.

So with another project squared off, next up will be (and I've already begun) resuming probably my longest ongoing army project. Stay tuned....
Posted by Shaitan at 12:30 No comments:

So I've spent the last couple of weeks pushing the Helmawr gang on for the Palatine Hive Facebook page challenge. And a bit of a challenge they have been. It's all be a case of getting the right colour scheme with this lot as I've rambled on about in the previous post on this project. 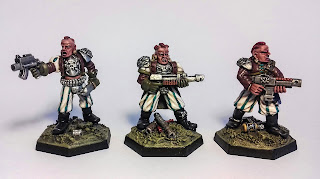 Personally I think these unreleased guys aren't quite as good sculpts (all by Roy Eastland) as the limited edition one. There is one more that I don't have but he's my least favourite so I won't be losing too much sleep trying to track him down. 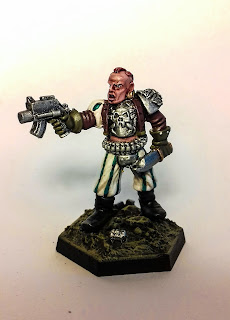 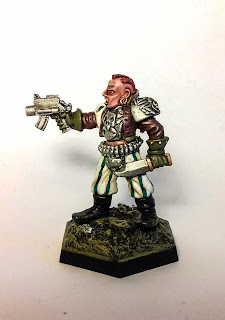 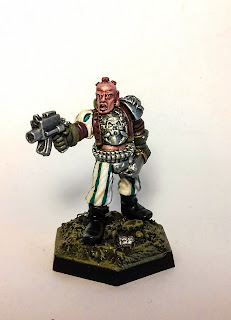 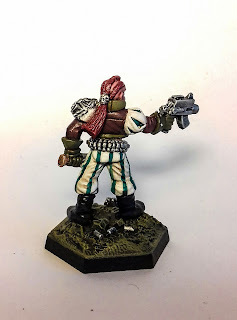 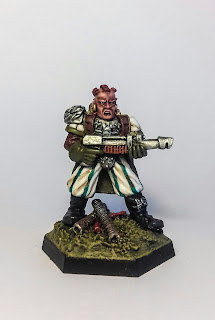 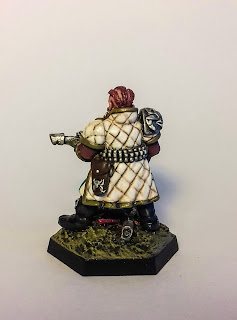 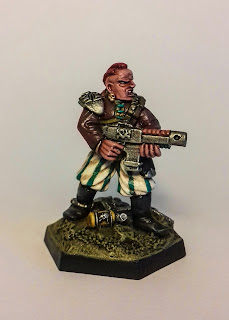 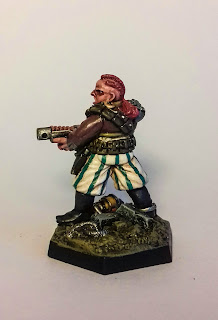 So the final post will be the big man; the Helmawr leader. He was originally the first guy on the list but due to a bit of ill planning and indecision on colours, I fucked him up. In fact, opting to get these gangers out of the way first has made life easier for paving the way for the leader and I certainly feel there's now less to fear.
Posted by Shaitan at 08:34 No comments: