Citadel Realm of Chaos Knight - a break from Empire

Giving myself a well deserved short break from the Old World Army Challenge, I had a rummage around in the chaos box and got the urge to convert and paint one of the classic realm of chaos knights.

I'd been recently revisiting Nico's incredible blog and in particular his chaos knights so there was plenty to inspire me.

Now for some reason I've always found the classic realm of chaos steeds a bit of a bogey figure. I've attempted to paint a few over the years and all but once they've ended up abandoned and either pushed to the back of the desk or tossed back into the chaos box. Despite this, I decided that I'd convert this one as well as the rider. This is the outcome. 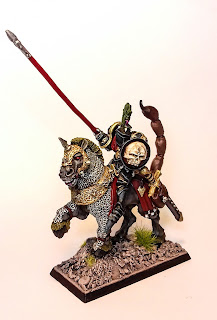 The rider himself is not one of the original mounted knights (his legs are of course); I decided to use the top half of one of the chaos charioteers - I luckily have a spare of this guy. It was a very simple conversion as he was sculpted around the same time as the knights so he's perfectly suited. 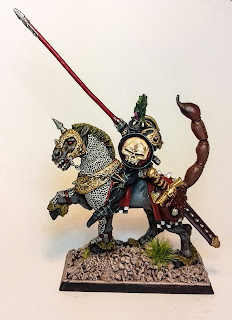 The steed itself has a few alterations. I added the sword from the khorne juggernaut plus the scorpion tail from the classic citadel manticore and a spike to the horse's head. The severed head is a mould press from one of the trophies sported by the hobgoblin character Gyokurinti the strangler. There was also the addition of a length of chain. 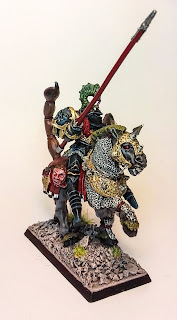 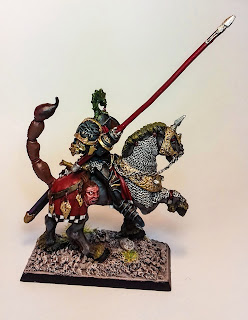 The knight himself was fun to paint but as per usual I did struggle with the steed and it was only in the latter stages that it began to come together. I think the plan will be to have him front a Khorne warband, one of which I rolled up the other week but there'll be more to come on that in the coming weeks . Meanwhile it's back to the army challenge!

After sitting out January I've got back into the swing of things with February's Old World Army Challenge. 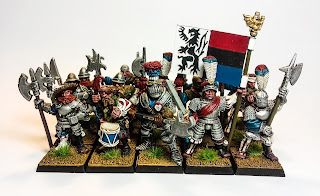 The latest addition to my Borders Princes force are a 15 man halberdier unit which includes a champion, standard bearer and drummer. 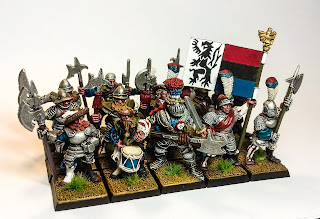 I wanted to achieve a real varied look to my unit by using as many different looking troops as possible; men who have hailed from across the Old World seeking fortune and a better life. 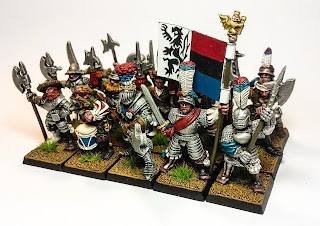 • 15 Halberdiers including champion, standard bearer and drummer from the principality of Myrmidens - 208 points. 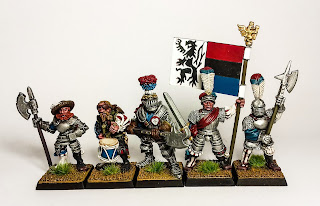 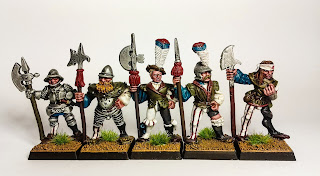 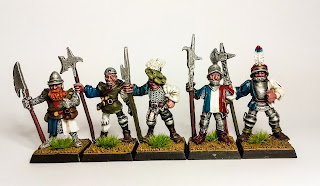 It's not the most detailed banner ever made but that's about the limit of my freehand. On the plus side I've always wanted to paint a halberdier unit so that's another thing to draw a line under and I'll probably expand it at some later date.