Last week I painted my first ever crossbowman - and now I've painted a second along with axe wielding fighter and a henchman to round off my Tilean warband.

All 8 mercenaries are finished; here are the final three. 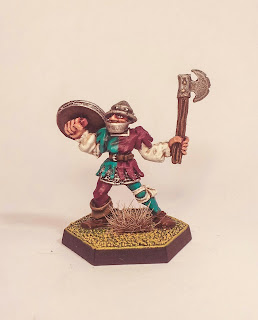 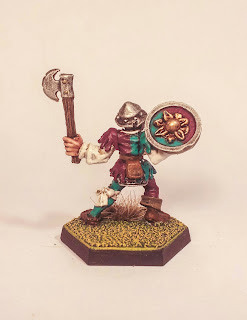 Gennaro Castagnola, a mercenary axeman from the southern city of Luccini. Once a bodyguard to a former State Leader, Gennaro chose the life as a mercenary after the overthrow and assassination of his master. 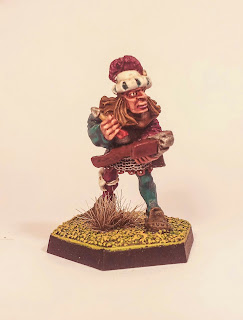 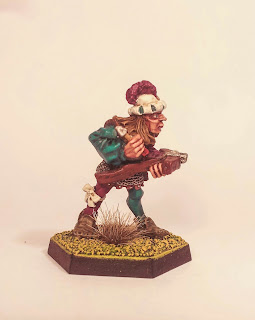 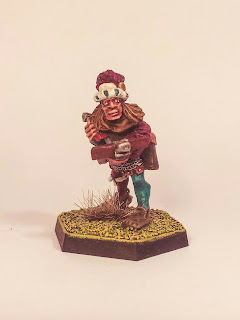 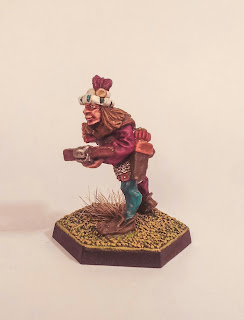 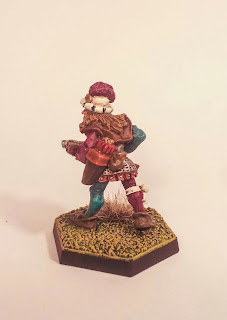 Orlando Di Chiara, a deadly marksman from Pavona. A deserter from the Pavonan Municipal Guard, the renegade Orlando has opted for the mercenary life and the quest for riches. 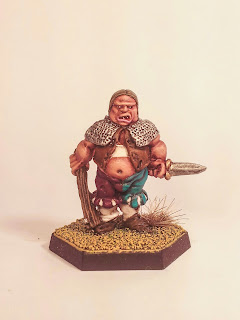 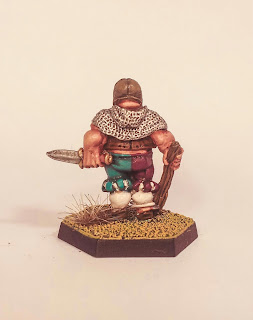 Ubaldo Monzo, a brutish criminal from Remas with a reputation for murder and extortion.  Hired by Condottiero Leopoldo Di Vittorio for his cold blooded and ruthless brutality.

So that's that; a rare case of me actually starting a project and finishing it without any breaks or other figure distractions. I will kind of keep this warband open ended as I may add one or two more should I feel the need at some point; perhaps a duellist or even something a tad larger.
Posted by Shaitan at 21:20 No comments:


Next up is some more additions to my Tilean Warband whose beginnings featured in my last post. I've delved into the Eternal Champion box set once again, this time using Elric's companion Moonglum as a Tilean youngblood. Up until now I'd been finding it a little difficult to find suitable figures to represent a youngblood; there aren't a great deal of options out there in the old citadel range - as far as I know. 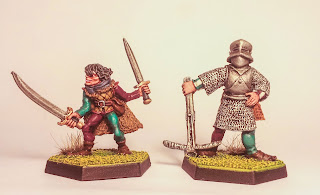 I've also gone for a crossbowman from the citadel big fighters range for my other warband member. I'd say this fellow is one of my favourites of all the fighter ranges. 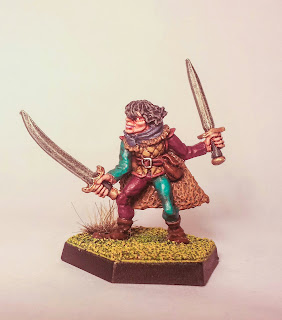 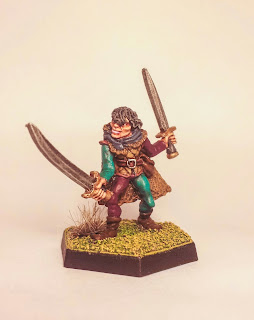 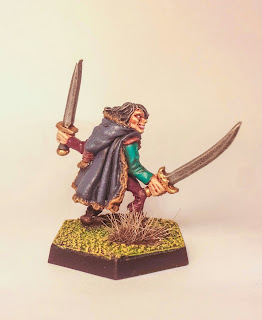 Tristano Tomasso, a wily youngster who fled his family in Verezzo keen to serve under the command of the revered and charismatic Captain Di Vittorio. 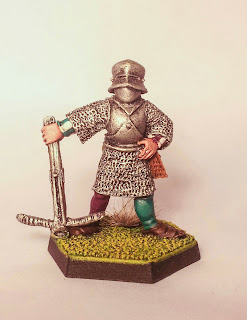 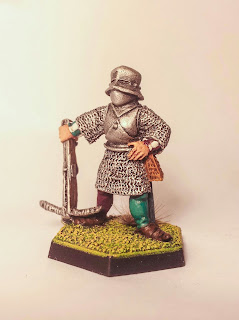 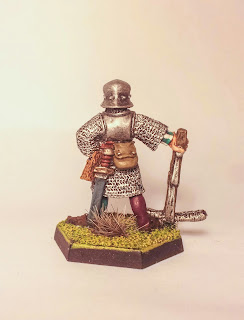 Massimiliano Gorga, a stout marksman for hire hailing from the Tilean city of Remas.

I do like the way that each figure differs greatly from the next; something that seems to work well with mercenaries. I'm in the middle of painting man six at present; seven and eight are not too far behind so within the next week or two I'll most likely be posting them up as a trio.
Posted by Shaitan at 07:15 No comments:

The Beginning of a Tilean Mercenary Warband

Okay so it's not another Chaos Warrior this week as planned. Instead, still on diorama break, I've made a start on something from this year's to do list; a Tilean Mercenary Warband. 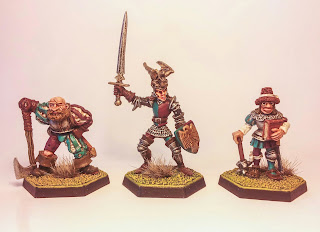 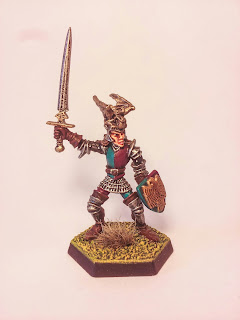 Leopoldo Di Vittorio, hailing from Toscania in northern Tilea. Standing at a lofty 6'6", Leopoldo is an imposing figure who is bred from aristocracy. 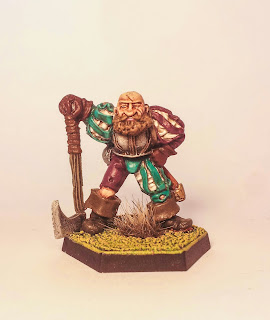 Umberto Colombano of Udolpho, also in the north. A man of great brutish strength who lost his left eye battling with his feuding brother whom he vanquished. 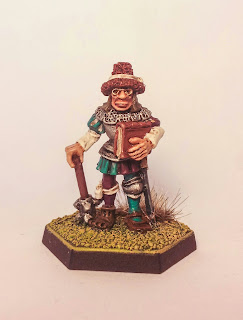 Ermilo Moscatelli, from Trantio. Despite his slender build, Ermilo is a hardy warrior; a knowledgeable fellow with a fondness of Cathayan philosophy.

Apart from a red yellow and black (I think) colour scheme in a White Dwarf (again, I think) there is little to suggest a specific livery for Tilea. This gave me plenty of scope on what colours to choose so it was a good excuse for turquoise and purple.

I've been thinking about which figs to use for a while now and looking slightly further afield from Empire and classic fighters I spied some serious potential within the Eternal Champion range.
The warband Mercenary Captain has been represented by Elric of Melniboné from the Eternal Champion box set. I think he looks well suited as a Tilean aristocrat with his pomp and haughtiness. 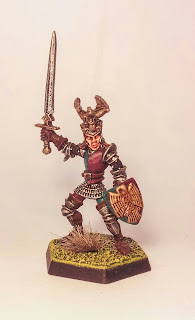 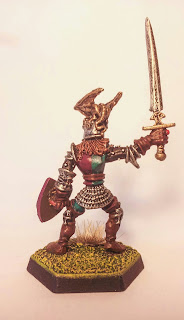 For the warband champion I opted for using Smiorgan Baldhead from the Eternal Champion personalities range. This is a figure that I'd almost forgotten about; he's a cracking sculpt and makes the perfect Empire character. 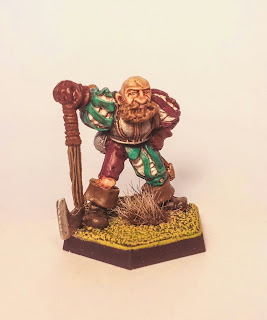 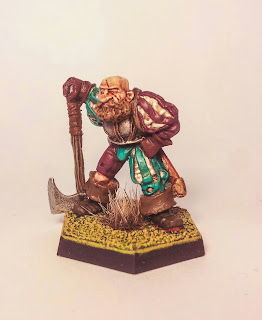 For the third warband member, I used the Gunnery Captain from the F2 fighters range. Another great fig, all three are sculpted by different designers; Jes Goodwin, Alan/Michael Perry and Aly Morrison respectively. 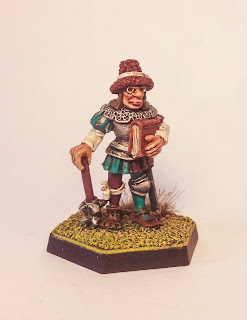 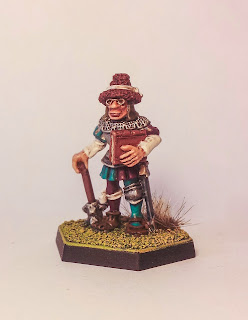 So that's that for now; I haven't fully decided on which other figures to use for the rest of the band yet although one or two have been pencilled in.
Posted by Shaitan at 15:33 No comments: