The Beginning of a Citadel/Marauder Empire Fighter Warband

With something finally painted and confidence restored, I felt it was the right time to embark on the classic Fighter warband as mentioned at the end of my previous post. So here are the first two members, the Captain and Champion. 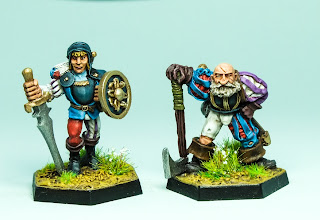 Now it's been something I've intended on doing for several years and I've attempted to make a start in the past but I've never quite been satisfied with the colour schemes. The plan is to have the warband made up of Citadel fighters, mainly from the F2 range and Marauder Minuatures, although as you can see here, I've opted for the excellent Smiorgan Baldhead figure from the Eternal Champion personalities range to represent the champion. I can't think of a model more suitable for a grizzled veteran - he was always destined to be part of this project right from the off. 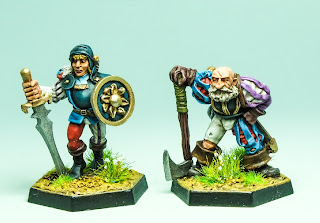 With the warband leader, I've gone for one of the Marauder MM60 Empire fighters; probably my favourite of the range. I've always liked that slightly hawty appearance he has. 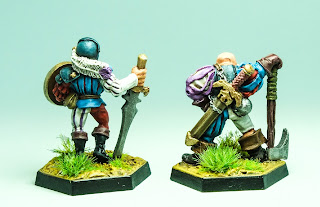 I have to say, this project carries a fair amount of inspiration from the superb Averland warband painted by Chris Sabick of Blue's Marauding Miniatures and if by some gross misfortune, you've never had the pleasure of seeing it, it's well worth a look - HERE

So the next plan is to get another three painted and post up in a week or two. The aim will be to end with around a dozen in total with the inclusion of a Marauder Ogre - that is if I can get hold of one!

On a final note, something I have recently invested in, due to my eyes beginning to feel the strain of close up work, is a magnifying visor and I'm delighted to say that it's made a hell of a difference.

I've finally gotten around to blogging my first post of 2021 which is due to not getting anything painted in about a month and a half. I had planned to work on quite a bit over Christmas but contracted Covid which laid me up until new year.

It was pretty grim but could have been a lot worse but it did leave me feeling quite mentally ravaged more than anything and when I was functional enough to resume the hobby, I found I was totally at a loss as to what to work on. After several failed attempts at various projects plus a huge lack of confidence, I finally managed to complete something, albeit one solitary figure. 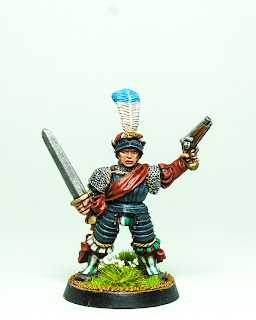 I've gone for something familiar to get me going again - an Empire mercenary captain. I decided on the colours of Hochland, mainly because I fancied working with green which is a colour I've barely used in recent years. The model is originally the excellent standard bearer which has been slightly modified with a hand conversion. 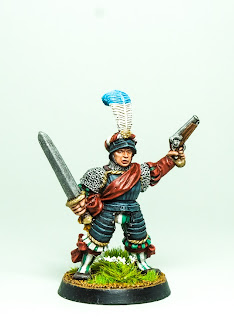 He was painted as a one-off but with the option of adding a retinue if he turned out well so I've lined up several models for that. The important thing was getting something finished and have my confidence return. 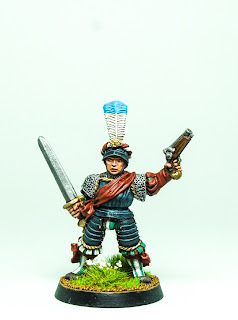 Meantime I've managed to gather some ideas for some other projects over the coming weeks/months, in particular a classic Citadel fighter warband which has been something I've wanted to get done for years now. A combination of careful figure selection and deciding on colours for the uniform has always kept this idea stalled but I think I've finally got the green light. The way things are going I should have a couple ready for posting next week.