So with the last pair of rogue trader space marines finished this week, I've rounded off my five man tactical squad.

I've gone for Brother Leanman and my favourite heavy weapon marine miniature for the final two in what has been a very economical project as all five models were spares from when I finished painting my space marine army several years ago. 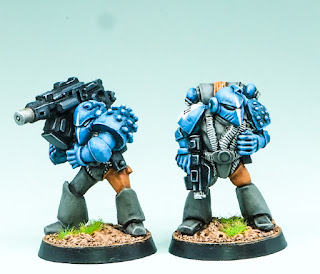 I've been delighted with the amount of positive response on various social media platforms regarding the colour scheme that I've opted for. I spend a lot of time working out colour schemes on all of my projects (more than the actual painting sometimes) so it means an awful lot!

There is always the chance of adding to this chapter at some point but a tactical squad was all I'd set out to achieve for now but it's been an enjoyable little project so it's pretty likely you'll be seeing more of these guys down the line. 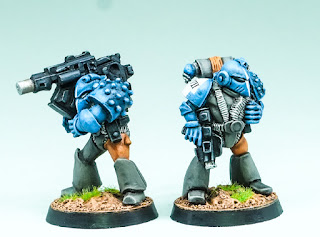 As these guys are part of an Inquisition aligned chapter, the plan is to include an Inquisitor in terminator armour so I'll be working on that in the near future but also I'll be making a start on the next project which is a Chaos Renegade warband which is something I've wanted to take on for a long time but never quite found it to be the time.