Well everyone else is doing it so I thought I'd better post up a review of the year. Wasn't going to bother with one at first;  I wondered if people would really be that fussed at seeing just a load of repeats but annual reviews are now seemingly commonplace so here it is.

Overall I think that this year may well be my most accomplished yet. For a number of years I had planned to produce a 40k vignette which involved some kind of aerial theme and in 2015 I managed that one. 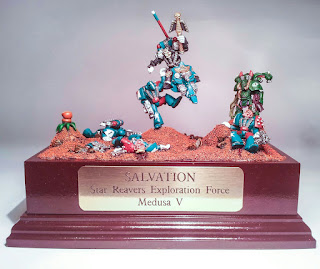 I was able to get the majority of the Star Reavers space marine chapter out of the way with just a small handful of figs remaining to complete it. 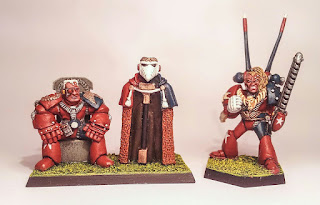 The beginning of an Empire Marienburg force including Emperor Karl Franz. I think, like the marines, it'll be pretty easy to come and go with these when I feel like it (some more this coming year with a bit of luck). 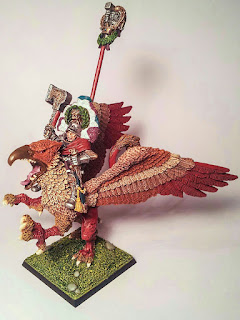 I finally managed to get my hands on some of the limited and unreleased Confrontation Bratts and made a start on a gang. Think they'll take some time to complete due the difficulty of their availability. 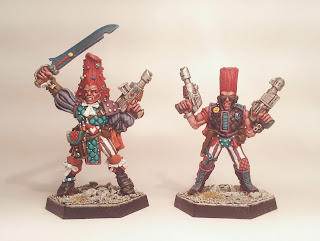 I managed to make a start on a Khorne warband but will wait until next year to finish that
off. 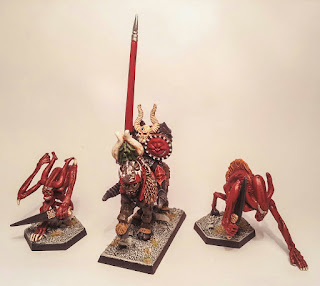 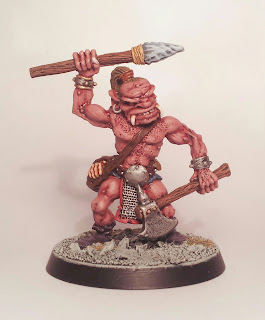 There were also a few miscellaneous projects such as finishing off an Orc Blood Bowl team for Orctober, a Tilean Mercenary on Culcan (another idea I'd originally devised a few years ago) and even some highly converted Elf hussars from Flintloque. 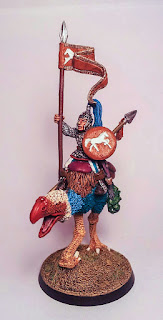 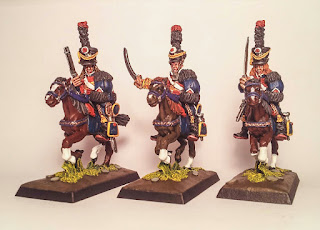 But I think what has pleased me most in 2015 has been finally getting my 15 year planned diorama underway. I've been hard at it for the past couple of months so recent posts have been a bit seldom. I still aim to finish it sometime during February.

So plans for 2016.....well complete said diorama; that is the primary goal, round off the marines, knock out a couple of warbands and finally paint a Rogue Trader with a retinue  (something I keep putting off because I need to decided of figure selection) or Space Pirate gang.
There is also plans on another diorama/vignette project which has been in pre development for many years. A Knight on Pegasus versus Balrog but we'll see.....

So this time next year we'll look back and see if my intentions were all good. Happy New Year to you all and I hope all your forthcoming projects for 2016 prove fruitful. I expect to see some pretty impressive work from the Oldhammer community.

With the year all but over and it becoming increasingly unlikely that I'll manage to get a post consisting of any finished paint jobs up before 2016 due to the diorama project being only roughly 50% complete and not looking to be finished before February, I've decided to compile a timeline of my history in the hobby to prevent the blog from getting a tad stale.

1984
It all starts aged 8 when I'm round my older cousin's house and he and a mate are having a large scale battle on his bedroom floor (Warhammer 1st Edition I'm guessing). Having caught the Fighting Fantasy bug a year or so before, it doesn't take much for me to take an interest.
I buy my first Citadel Miniature from a place called Dreamz (basically a card shop that stocked a small amount of figures) in Newport on the Isle of Wight despite being too young; I think they were not for sale to children under 10 at the time. Sadly that figure is long gone but it was a 60p Half Orc like the one shown below. 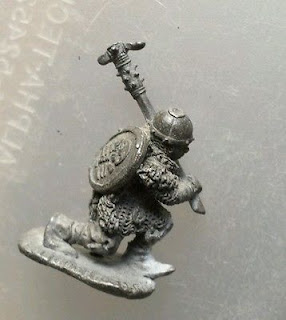 Others followed soon after such as fantasy tribe skeletons and more half orcs. My Dad never approved; I was only permitted to buying Humbol red, yellow and blue and having to mix them to obtain other colours. Eventually I persuaded him to buy me a black, white and a silver. The results are pretty grim to be honest.

1986
After stopping for a year (probably because I was disgruntled with my early efforts) I discovered that figures now came with plastic bases and shields. Among the first slotta based purchases were an AD&D Umber Hulk, and the Heroic Fighters of the Known World boxed set. A mate of mine brings into school The Third Citadel Compendium and for the first time I see hundreds of just some of the amazing miniatures that are out there. 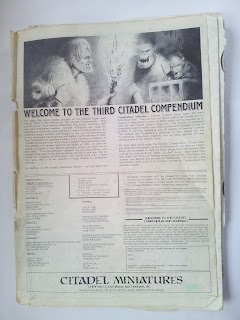 The original copy of my mate's Third Citadel Compendium

1988
With the mail of catalogue released and occasional trips on the boat from the Isle of Wight to Games Workshop in Southampton, my collection begins to rise and also my painting has started to improve; an older kid at school shows me how to drybrush and of course I'm using citadel paints by now. Plus Blanchitsu, 'Eavy Metal and my bible, the Golden Demon book of that year, Fantasy Minatures are great inspiration. Oh, to be as good as that, I wished.

1989
With Blood Bowl 2nd Edition released by now I begin to start properly playing my first type of games, although some of  my mates were and remained over the years exceptional players (a couple of them would regularly beat members of staff at Southampton GW at the tender age of 13) so I used to get put off playing a lot of the time.

1990
I drift out of the hobby for a number of reasons (trouble at home mainly, I think) and it will be three years before I make a return.

1993
With the love rekindled, one of my best mates who is also on hiatus sells off a few bits from his collection (my own has been greatly depleted at this point). I self teach myself how to blend and am able to take myself to a new level. I wish I still had some work from this period but was frequently stripping and repainting as I improved.

1994-1996
3rd Edition Blood Bowl and Necromunda releases see a return to gaming altough it's still tough going trying to beat any of my mates in Blood Bowl. With Necromunda I fare rather better.

1997
I decide that this is the year I will make an attempt to enter the Golden Demon awards so spend months on coming up with an entry and eventually opt for a Necromunda Cawdor gang; the one I regularly play with in fact. With a couple of mates along for moral support I am blown away when I first see all the many incredible entries on display. I am even more shocked when I manage to pull off a third place in the Necromunda category. The following month I get to visit the GW studio (the new Lenton site has recently opened), the gang get photographed for White Dwarf and I get to take home a load of free lead (white metal). Yippee!

1998
I spend many months obsessed with entering again and after many failed projects, submit three entries for this years' competiton. I remember it being an unpleasant experience due to feeling stressed and nervous all day (I suffered a bit from anxiety at that time) but was astonished to manage a second place, this time in the Warhammer single miniature category. Looking back of both years, I feel I was incredibly fortunate as there were some phenonenal entries submitted. 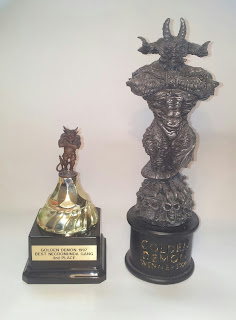 Both gongs (both damaged over time and glued back together) 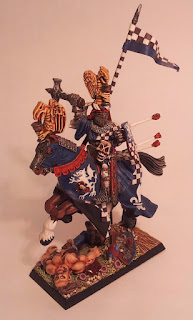 1999
After initially planning on a third Golden Demon entry, I drift off the idea. My mates have moved away, I've kickstarted a social life with new aquaintances and life moves off on other paths....

2001-2004
After a trip into Mum's loft, I retrieve all my stuff and get back on it. I am dismayed, however on learning that all the old range of Citadel classic back catalogue is now discontinued. With the introduction of ebay I am able to begin tracking down the now Out Of Production items that I need, in particular the Chaos Battering Ram that I have wanted for so long and had written off ever owning.

2005-2007
These days gaming is all but non existant and the hobby for me is now purely just a painting one. Painting is less frequent during this period; sometimes weeks or months inbetween projects before another dip out of the hobby for a few years due to my job forcing me to work away.

2012
Finally getting my life back, I return to the hobby and begin to finish off a load of half started projects such as my Rogue Trader Space Marine force and some Blood Bowl teams.

A quick shot of the Marine force so far

2013
I begin to spot a number of inspirational blog pages when searching for images of other people's work so decide it's time to start up my own one. The Work of Shaitan is born. I finally finish the Chaos Battering Ram which becomes my debut blogpost. 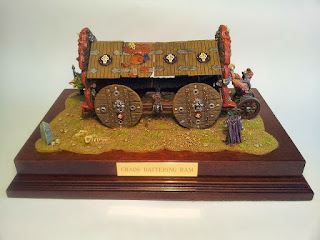 2014
Meeting new faces from blogging, The Oldhammer Forum and later the Facebook pages have made this the most enjoyable period in my history of being associated with this hobby to be honest after some years of it being a very solitary pastime.

2015
My apetite for painting just seems to keep growing and projects ideas keep on becoming a reality. I believe the presence of all you other guys out there keep me going and prevent me stagnating when I see so much awesome work from so many talented fellows literally on a daily basis. I finally embark on my current diorama project which was originally conceived in 2001 has been extremely encouraging. As I said before, early next year should see it completed.

Well that's about it without getting too long winded. I'm sure there is plenty of other crap I could have mentioned. Have a merry Christmas and I hope to post the finished diorama up as soon as possible. I may take a week off it and paint something one off to post here but we'll see. I wouldn't want to lose momentum now!
Posted by Shaitan at 00:45 No comments: