Finally I get my first post in of 2016. My main reason for such slowness is moving house (again - should be the last in a while); I only unpacked all my figs and set up the new cave about a week ago.
Also, I have been at a bit of a crossroads as to what to paint. Despite half way through the diorama, there has been growing concerns from me about project burn out. It's happened before; I get over obsessed and over productive and my brain just fries and I have to stop, unable to even look at the project in question. I'm sure some of you may have been there before.
I even considered another small project but in the end couldn't commit to taking on anything too involving. Then I finally opted for the usual remedy.
"Just paint a chaos warrior or two as a stop gap then resume normal service." So here is one: 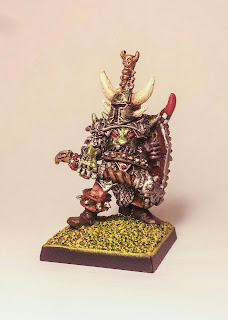 Not just any old chaos warrior mind. He's quite a scarce fig as it happens; one of the Citadel Collect Counter range from pre slotta times circa 1984. It consisted of a Barbarian, Dwarf, Wizard, Halfling, Troll, Ogre and Knight of Chaos; this guy. Basically you had to collect counters cut out of blister packs to make up the picture of one of the characters. Then after sending off the completed picture, you were sent the respective figure.
I'm 99.9% sure it's (along with the rest of the range) a Perry twin sculpt; the wonderfully decorative and unusual mace/club weapon would seem to give it away. They had a knack of creating smart looking, innovative weapons on their Chaos figures back then. 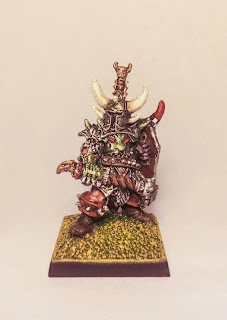 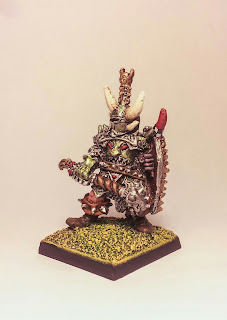 I think he's a terrific fig and if he'd hailed from the slotta based era and languished in the C35 Chaos Warrior range he'd be regarded as a well known classic rather than the somewhat obscure corner the Citadel pantheon of which he was allocated. 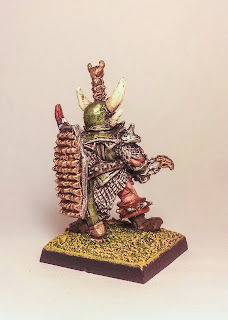 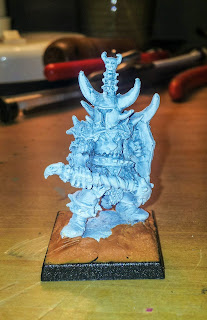 So I'll probably knock out a few more Chaos Warriors over the next week or so seeing as they're pretty straight forward to paint and then resume afresh to continue the bigger project.
Posted by Shaitan at 21:45 No comments: