I've decided to stick with the Nippon theme after thoroughly enjoying the three Oriental Heroes that I painted the other week. Up next is a Samurai riding Temple Dog. 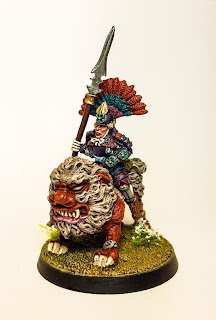 This wonderful sculpt was, as far as I know, only available on the GW 1989 Easter sale flyer. The samurai was one of three possible riders, the other two being a hobgoblin and a dark elf. 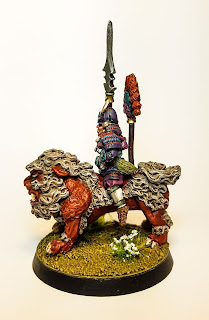 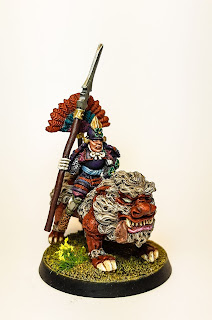 Temple Dogs are stone statues found guarding temple entrances in the lands on Nippon and Cathay. They resemble nothing so much as a cross between a giant pekinese and a lion. In times of war, the power of the temple gods is channelled into these statues to animate them. It is a great honour to mount this divine animal, indicating that the rider has found great favour with the gods. 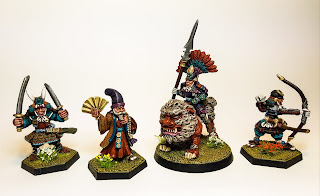 Another figure that has been sat in a box for over 10 years, it's pleasing to finally get it painted up. I was unsure whether to paint the creature entirely as stone but in the end opted for a red skin to avoid it coming across as too drab.
There doesn't seem to be many other painted examples around. I've seen a couple of the hobgoblin variants that have come out really nice but the samurai rider seems a bit aloof.

I've plans for a small Nippon warband now I've a few painted so I'll stick with the Oriental Heroes while the enthusiasm is still there.
Posted by Shaitan at 18:33 4 comments:

I'm all Empired out! There, I've said it. After over a year of pretty much nothing else, it's hit me that I need a change. Over the Christmas period I managed to do little but stare at various Empire figs with zero enthusiasm. I've therefore decided that 2019 will be more based around a 'I'll paint whatever shit that takes my fancy and less themed' procedure. And that's how it should be anyway, right?

Something I've been wanting to paint for a long time now are some of the brilliant classic Oriental Heroes. I've finally managed to knock a few out; a Wu Jen and a pair of samurai. 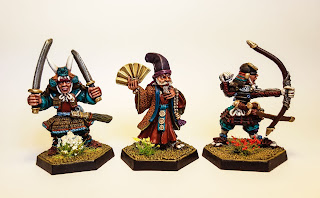 I won't go into all the history of this range as all you need to know and more is over at The Lead Pile where Colin aka Whiskey Priest posted a marvellous piece last year telling you all about them. 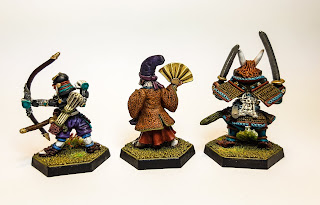 I think what has always put me off painting them is the challenging palette that comes with them. I have always found samurai armour very daunting to paint. Most of the ones I own were bought quite a few ago and have spent too long in a box. 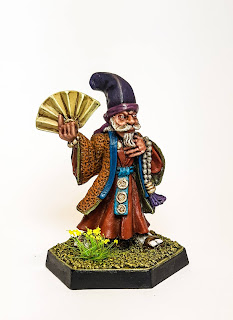 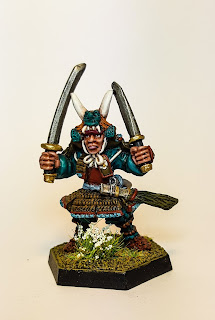 Samurai with katana and wakizashi 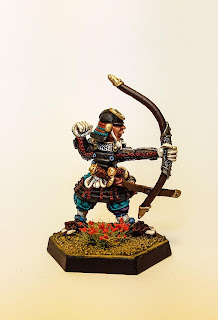 
The Wu Jen figure had been a target of mine for quite a while. I'd seen the odd one for sale on ebay for ridiculous prices (40 quid springs to mind) but finally managed to grab one for about a tenner. Then he too joined the others in a box until now. I can't think of a figure I've enjoyed painting so much in recent years.

I'm really getting a kick out of painting these fellas so I may run with it for a little while longer.