40k Renegade Warband Update - In search of a ship


Taking up the baton from Rochie once more, it's my turn to contribute to the 40k side of our warband project again and have made a start on Kalrath's followers; two of the humans in fact. 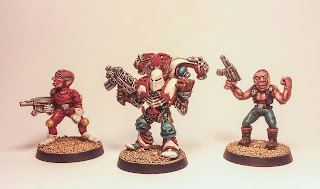 Having fled his chapter on Samson IV in the Calixis Sector and The Inquisition in pursuit, Kalrath was in dire need of an escape off world and with luck, obtain some loyal followers who could assist him in his long term plans.
Eager to find a crew with a ship, the renegade found some form of fortune in the underworld by encountering two runners for notorious drug trafficker Deverell Del Core.
Psychopathic drug addicts, Miki Machida and Rollan Dattilo were easy targets for Kalrath, both having experienced glimpses of Chaos from the warpstorm tainted glass shards they constantly craved.
Satisfied with the initial recruitment but in need of more devotees to the cause, the next step for Kalrath was to arrange a meeting with Deverell Del Core.... 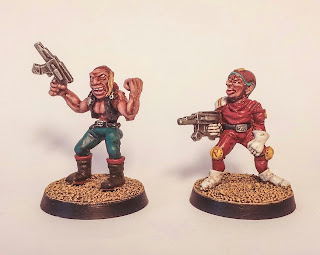 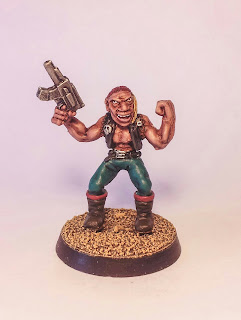 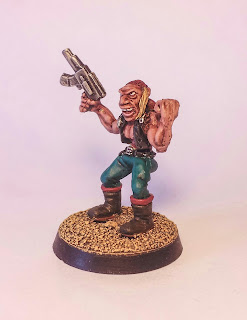 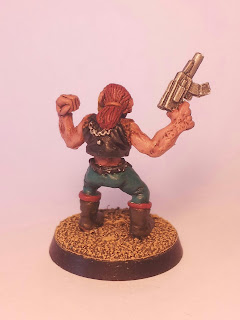 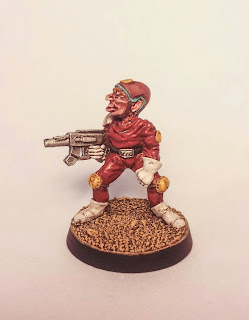 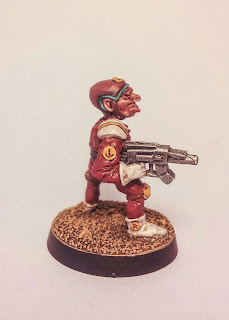 Both figures are part of the Judge Dredd Perps range and were great fun to paint. My aim is to keep this retinue in a totally non uniform style.
So next week it will be back to the fantasy Chaos warband and I'm sure Rochie will be posting his efforts for that one over the next few days.
Posted by Shaitan at 07:13 No comments:

With our 40k warbands underway and Rochie kicking off his Warhammer Nurgle Warband in spectacular style, it's time for my Tzeentch warband to come into play.
I rolled myself a Level 5 Human Hero and the obligatory Level 1 Wizard power and for personal attributes, Breathes Fire and Choose Your Own (I decided on Three Heads as I was desperate to have an excuse to use one of my favourite Jes Goodwin Champions!) I equipped him with an extra sword and light armour.

Then it was onto the retinue; we decided to allow a free roll from the Other Table to give us the chance to roll something a bit different. I ended up rolling Two Minotaurs, One Troll, Two Hobgoblins, Four Beastmen and finally from the Other Table, a Cold One. Overall I was pretty happy with that, particularly the Choose Your Own. ;)


So here is Dieter Heldengast: 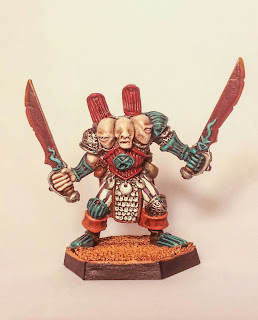 Once an aspiring Mercenary renowned for his skills with twin blades named Hatred's Tear and Hope's End, Dieter and his two brothers, Marius and Rainer had embarked from Marienberg, their hometown and like many other fortune seekers, set out for Mordheim in search of Warpstone.
Marius and Rainer, the two younger siblings although daring and reckless such as mercenaries are generally portrayed, were proud and honourable young men at heart but Dieter was reputed to being a double dealing untrustworthy fellow; a back stabber (literally) who would stop at nothing to exploit for his own ends.
The destiny of Deiter Heldengast would be drastically reshaped when the brothers' journey came to a sudden end on the last leg in the sombre province of Ostermark after a brutal skirmish with Tzeentchian cultists in a temple hidden in the mists of the Eerie Downs. Their opponents were little better than peasants presumably persecuted  and displaced from their homes in the nearby villages but their leader, a Magister was a more formidable opponent and Dieter was badly wounded in the face from a misaimed spell that would have obliterated him if his would-be assailant wasn't cut down from behind by Marius and Rainer.
Laying there in blind agony still clutching his two blades, Dieter was overcome by a whispering reedy voice in his head. His brothers, bent over him were querying his situation but he could not hear them as the voice continued to enchant and captivate him. Eventually he requested they help him to his feet; on doing so Marius and Rainer were cruelly run through by their blinded sibling!
As they lay there dying in disbelief, the heads of the unfortunate pair began to dissolve as Dieter still enthralled by the alluring voice began to change. His severely damaged face became smooth and featureless apart from his mouth. Two new heads were formed either side of his own; the heads of his brothers. These were now also bald and featureless save
for a single eye on each. His twin blades became magnificent curved weapons of fire; each bearing the mark of Tzeentch and his armour now a mass of intricate grooves of blue and red. Without hesitation, a jet of flame burst from his mouth and smothered the corpses of brothers and cultists alike.
Turning his back on the inferno, Dieter strode proudly from the scene of carnage and out onto the Eerie Downs in excitement at the prospect of serving his most generous new master.... 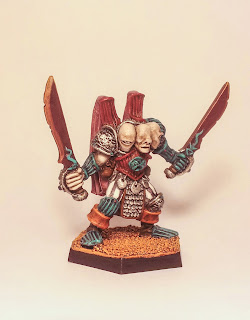 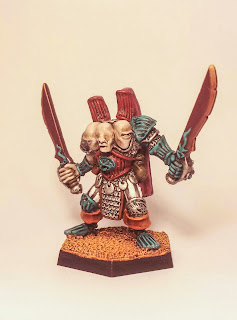 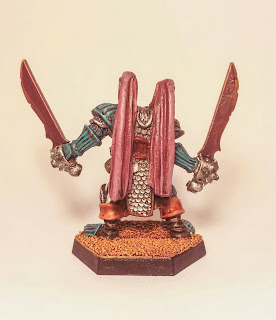 I'd have to say this is my favourite of all the Jes Goodwin Tzeentch Champions and like the others, I found him not an easy fig to paint; for a day or so I just sat looking at it. I'd definitely categorise as one of those "Where The Fuck Do I Start?!" figures.
Anyway, there he is. So it's back over to Rochie for the next chapter of his 40k warband as it's time for me to resume my own one.


After seeing the successful collaboration between Axiom and Asslessman with their wonderful Rogue Quest project a short time back, I was keen on forming some kind of partnership and embarking on a joint venture of my own. So who better to ally with other than Mr Rochie Rochfort over at Buried Under Lead? We first discussed an alliance back around Christmas but up until now we've been a bit tied up with some time consuming projects. Now the time is right and we have decided (I think it was him actually) to paint two Chaos warbands each, one fantasy and one 40k.

As it states on his page we have chosen two powers each; one each for the fantasy warband (Nurgle for Rochie and Tzeentch for me) and the second pair for the 40k warband (Rochie undertaking Slaanesh and myself opting for Khorne).

A week or so ago we got round to rolling up our respective warbands. I actually generated mine whilst shopping in Lidl (perhaps the first case of this in history), me on the dice generator and Rochie reading the results from the Good Book via Facebook. I could have done all this myself when I got back home but the momentum was with me and it couldn't wait.

So I ended up with a Chaos Renegade Major Hero of Khorne with obligatory chaos armour. He also comes with bolter and frag grenades. His other attributes are two hounds of chaos and a tail.
So here is Kalrath The Barbarous. 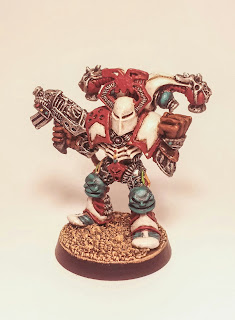 Formally known as Captain Kalrath Verus of The Star Reavers, he fled his chapter after the discovery of the continuous blood sacrifices he had been practising in the attempt to gain the attention of Khorne. It had began with the reckless and brutal bloodthirsting during battle where his troops would look on as the blood soaked captain maniacally tore through his beleaguered and overpowered foes. After a while he became aware of a painful growth just above his buttocks; ignoring it his lust for blood and carnage continued and he begun to indulge in the blood sacrifices performed in secrecy. His 'growth' evolved and developed into  a fleshy tail with a scaled base; something that could no longer be concealed from his comrades. 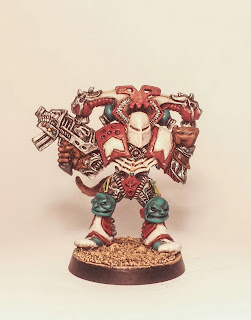 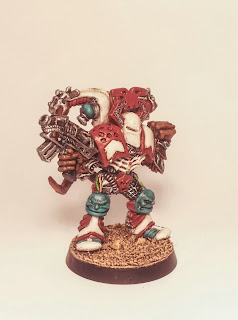 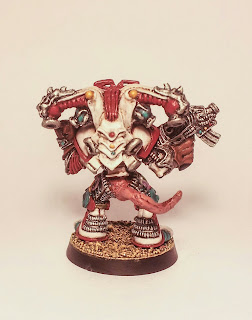 One of the Kev Adams renegads, I have used a tail from a (already damaged) C48 Gargoyle

The followers that I rolled are an Inquisitor (nice!) and six humans. The inquisitor's attributes resulted in Cloud Of Flies and Silly Voice (not so nice).
We'll be seeing more of his retinue in the weeks to come. I haven't fully decided where I'm going with the inquisitor figure yet but I'm sure looking forward to it.