I am pleased to say that after about 25 years of desiring one, I have completed a substantially sized regiment of Empire (Tilean) halberdiers.

I think one of my main issues was achieving one where every model is different which isn't an easy task. There are ten 4th edition trooper models (I've only used eight of them) plus heroes and then it comes down to filtering in other models such as a few that Marauder has to offer plus conversions. The addition of the ogre certainly helped to bulk it out. 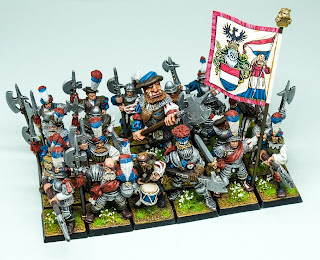 A prosperous, yet turbulent principality since Marco Colombo seized control, Trantio has become one of the most cultured and beautiful regions of Tilea. One of it's most renowned mercenary regiments are Guido Gargano's Halberdiers.

A prominent figure in Trantio, Guido is accompanied by his loyal champion, the towering Quintilano Dell'orso and Antonio Petruzzelli, proud to carry the banner of Trantio. Valzag the mercenary ogre, a distinguishing representative of the regiment, adds a fearsome presence. 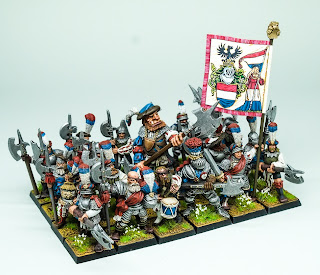 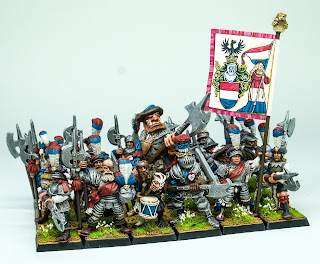 As I've mentioned before, the banner is a Habsburg renaissance one brilliantly designed by Pete's Flags. What had been bugging me, especially as the regiment grew was the lack of blue in the banner so I decided to add some myself, with a little reluctance as I'm not particularly good at freehand but it's turned out alright and I'm glad I went for it. 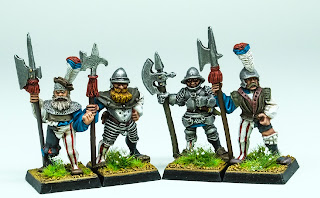 The third rank is a mixture of 4th edition Empire, Citadel F2 Dogs of War, Marauder and a converted spearman. 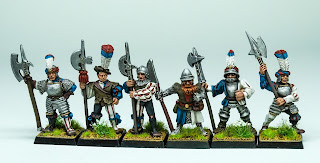 More of the same here too with the rear rank. What I was particularly happy about was the fact the last man I painted (second left) turned out to be one of my favourites of the regiment and didn't fall victim of being rushed which is always a tendency at the end of a long project.

So with my other two Tilean regiments still requiring several models, I am unsure on what is next. Maybe something completely different or even this small vignette that I keep threatening to do, although I'm still not 100% decided on a theme for that yet.