This week I have been working on the next pair of fighters for the warband taking my tally to six and the halfway point. I'm finding quite time consuming but going the extra mile with them is more than worth it. 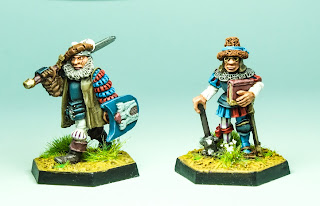 The first model is from the F2 fighter range again, Rombustus Sellsword (I'll be giving him his own identity when the warband is complete), a figure I first painted way back in about 1988 (not the exact same model unfortunately). 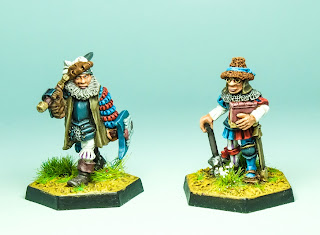 The second is one of my favourite fighter models, another of the F2 range, the Gunnery Captain. He is such a totally cool figure with a wonderfully characterful face. I just love those spectacles.

The plan is to jump off the project for a couple of weeks to participate in a painting challenge on fb before resuming these guys. Ideally I'd love to get the ogre of the group underway but seeing as I don't yet own him or even seem to be able to source him right now, that isn't going to happen. Hope it won't be too long before I can get my hands on one. I don't want to end up having everyone finished and no ogre to round them off. This is the one I'm after, by the way: 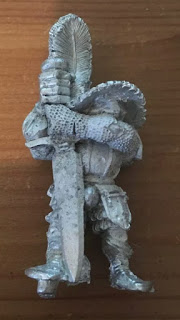 In addition to the captain and champion, I have a couple of the retinue ready this week. The first of the Citadel F2 Fighter range, a mercenary crossbowman and a Marauder Dwarf from the spearman regiment. 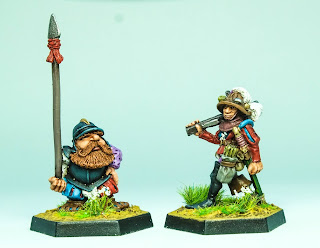 The dwarf is probably my favourite of the troopers in the afore mentioned Marauder regiment. My plan is to include a couple of dwarfs in the warband with the idea of having it based in Tilea, the principality of Luccini in particular, where dwarfs are known to reside. I'll be going into more detail with all that once the warband is completed. 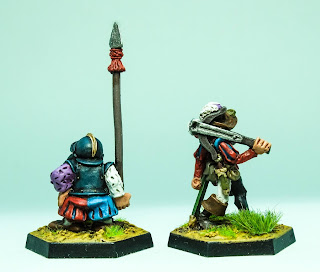 The mercenary crossbowman is a wonderfully detailed figure albeit tiny. It's certainly smaller than the other F2 fighters in general but then it is a variant of the Talisman minstrel model which is very diddy. I'd have struggled to paint him without the new magnifying visor which is proving to be an invaluable asset. 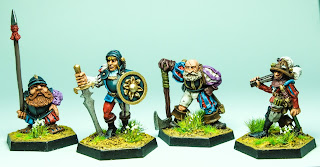 I'm currently working on the next pair which will put me at the halfway stage which is pretty good progress for me.
Posted by Shaitan at 20:50 6 comments: