A quick post this time; rather than wait til all six beastmen have been completed, I've decided to post the first two. Well one of them was actually painted about 5 years ago. I've rebased him plus given him a few alterations as well to fit in with the rest of the band. 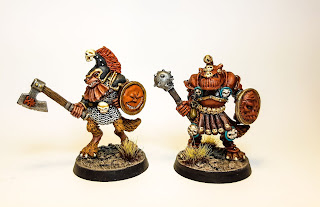 The bread and butter of any chaos warband

I saved the guy on the right from an eternity in the bits box, formally belonging to my mate who had hacked off the original weapon and used him as a blood bowl player.

I had actually gone off Jes Goodwin beastmen for a fair while. I felt they had a little too much order to them and had favoured the older broo and C27 beastmen instead. However, I've rekindled a bit of love for them and of course, suit the Realm of Chaos warband aesthetic.

I'm really enjoying a resurgence of painting red armour after an absence dating back to the mid 90's when I stripped virtually everything to begin the chaos army that exists today in metallics.

So the warband is nearing completion with just four beastmen to go. I'm keen to wrap them up as I'm continuing with the Khorne vibe and have plenty of exciting things planned.
Posted by Shaitan at 14:12 10 comments:

This week, continuing with the Khorne warband followers, I've been working on my roll from the Other table which I always give myself when rolling up a chaos warband, which gives me the excuse to paint something a potentially out of the ordinary plus adds some uniqueness to the retinue. I was delighted to have rolled a chimera. 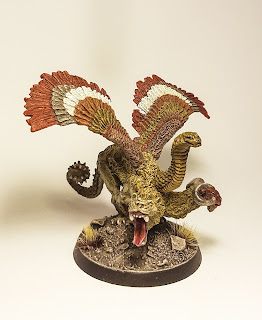 It was never in doubt that I would use the classic Nicky Bibby chimera sculpt which came with numerous head and tail options. 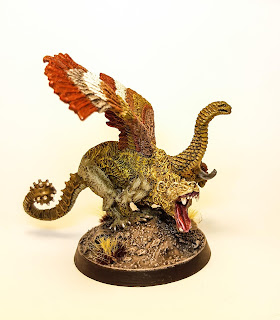 I've had a couple of these kicking about since my early teens and decided to pool my resources and use all of my favourite heads and tail on the one model. Well, maybe apart from the sabre toothed tiger head but it's a little too close to the lion head so I've excluded it. The joins where the heads meet the body are quite gappy so it required a fair amount of green stuff to pack it out and then sculpted into fur with a cocktail stick. 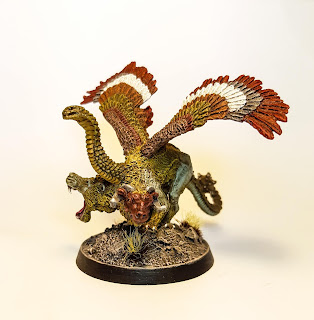 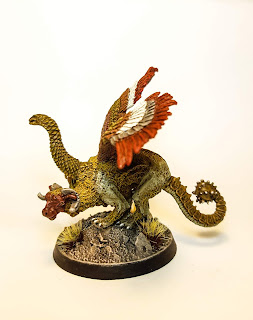 I've gone for a fairly muted palette on this one; opting for a more classical look over a khorne red appearance. Unfortunately, as I feared, it's been an absolute bastard to photograph and I'm not particularly happy with the end results there but it'll have to do.

The Khorne warband grows with some more aerial presence

So now there's just the six beastmen to go. I've nearly finished two of them so hopefully in a couple of weeks I'll have the lot completed and will be able to present a finished warband.
Posted by Shaitan at 16:03 16 comments:

Continuing with the Khorne warband followers, the next up are a pair of harpies that I'd rolled. Now having already owned the set of the Citadel C48 Gargoyles range and not having any actual harpies, I've gone for two that look non stone like. 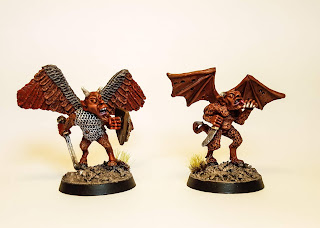 The gargoyle range sculpted by Aly Morrison was small (only 6 figures) and overlooked but quite varied.  You don't see many painted examples of them unfortunately. 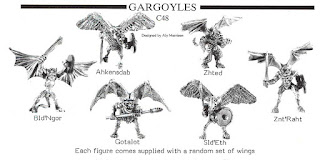 Image courtesy of The Stuff of Legends 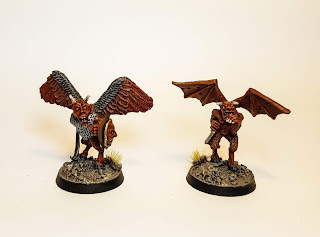 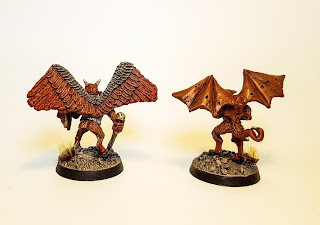 I've decided to go for a khorne colour scheme with mine over a more classical approach. This pair didn't receive any of the dominant chaos attributes.

So there's six beastmen to go plus the follower from the Other table which is what's up next which I'm really looking forward to!
Posted by Shaitan at 18:29 14 comments: