I think it's been a mixture of things; work has just been through the roof (12 hours days) The Isle of Wight festival (can't hack 3 days of boozing anymore) and a bit of the dreaded painting burn out/lost mojo (we've all suffered from that I think more than once at some point) but I've finally managed to post my long overdue Rochie collaboration project update. It's not a particularly special, stand out post but it's an easy one to get done in a period of poor form. 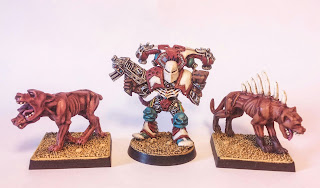 This week then it's the turn of Kalrath's Chaos rewards; a pair of Chaos Hounds. I actually painted these a few days ago but have just been too braindead to get round to posting them. 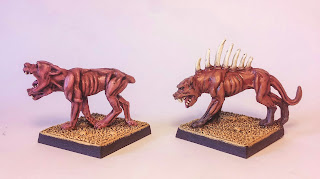 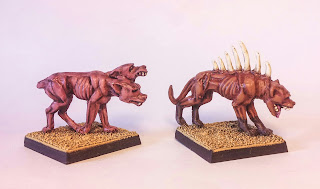 Ambushed and pinned down. Kalrath's pursuers had finally reached touching distance. All hell had broken loose in docking bay 17 as The Raven was being prepared for it's impending journey. After receiving a tip off, a five man tactical unit of Star Reavers marines had intercepted The Raven had begun a direct assault. Kalrath had himself to blame after he was spotted hacking the heart out of an unfortunate maintenance worker which had caused obvious unwanted attention but his master's bidding was paramount and blood must be regularly spilled. Here he now found himself cornered and with his followers running his personal 'errands' he was in serious lack of support. Or was he? The air was suddenly filled with predatory snarling snapping and howling. The marines were under attack from something. Siezing his moment, Kalrath leapt from cover to see that a couple of the members of his former chapter was being savaged by a brace of large hounds. One sported a row of long spines down its back while the other was too headed. The latter had ambushed the bareheaded Sargeant from behind and tore out his throat while the other savagely mauled its opponent while the Khorne renegade took him out with a head shot. Del Core and two of his hoods were now on the scene and opened fire on the three remaining marines who now distracted were caught in the open while the two Chaos hounds leapt to attack with Kalrath ready to pick his former brothers off. The brief, savage skirmish was over; Kalrath beheaded the Sargeant while his faithful new beasts sat obediently at his side. These were gifts from Khorne, with the sole purpose to obey their master, to fight for him with savagery and ferocity until death take them....

To be honest I didn't find them particularly enjoyable to paint. I guess a lost mojo won't help matters there but as sculpts they were lacking in quality somewhat. So it's over to Rochie again for his next installment and meantime I go large with my Tzeentch warband.
Posted by Shaitan at 13:24 No comments: