With another top drawer post from Rochie it's time for the next installment of my 40k warband. I was planning for two or three figures for this post but I've been held up a little with a busy work schedule so for now it's just the one addition. 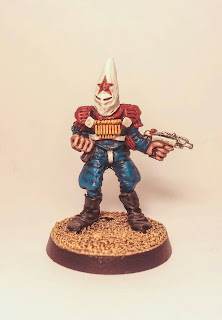 This one is a basic head swap; the body being that of the Traitor General figure from the 2000 AD Rogue Trooper range and the head (the second time I've used this for a conversion) from a Blood Bowl Chaos player. 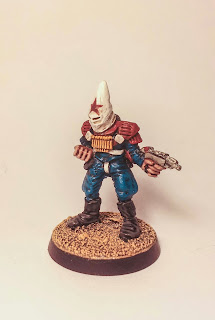 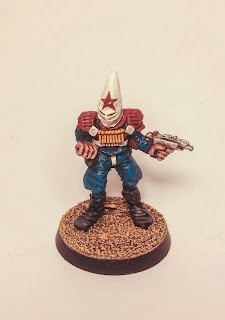 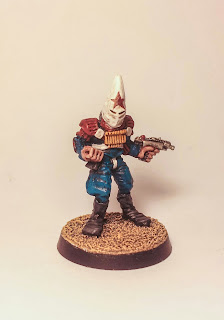 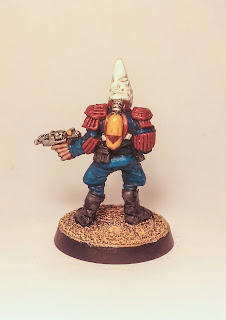 Notorious baron of the Red Star drugs cartel on Samson IV, Deverell Del Core monopolised  narcotic activity on the planet. His face permanently concealed with his trademark hood, Del Core's fearsome reputation preceded him although an unexpected audience with a renegade of Khorne with promise of untold Chaos power proved too tempting to resist. Agreeing to accomany Kalrath off world with a small crew of his trusted henchmen, Del Core ordered his personal Endeavour Class Light Cruiser, The Raven to be prepared for imminent launch. The drug lord rubbed his hands in anticipation at the prospect of a successful alliance and the opportunity of aspiring in the service of The Blood God.
Kalrath of course, merely saw Del Core as a means to an end; an accessory for the greater cause but for now, the ball was rolling and the renegade had began to make plans for a  destination.... 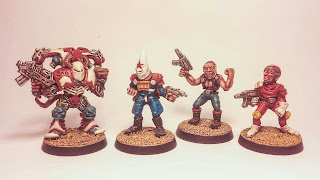 So that's it for now, time for Rochie to deliver the goods with his next contribution for his warhammer Nurgle warband. It should be another classic!  I myself will be making a start on my next Tzeentch warband installment which I hope to unveil next week.
Posted by Shaitan at 06:59