So up next, as planned, is the command base for my Texan Brigade, featuring its commander General John Bell Hood. I had to sculpt the extra long beard with green stuff as the model was sporting fairly modest facial hair that was insufficient to replicate Hood's. Dixon Miniatures feature a couple of nice models waving hats/kepi which I've put to good use here, cheering on their beloved commander. 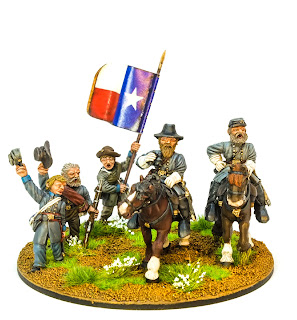 Arguably one of the best brigade and division commanders in the Confederacy, John Bell Hood was renowned for his bravery and aggression but was prone to recklessness. He was assigned to the Texan Brigade in February 1862, being promoted to Brigadier General the following month. He and his brigade performed well during the 7 Days Battles and featured prominently at Antietam later on in the year. 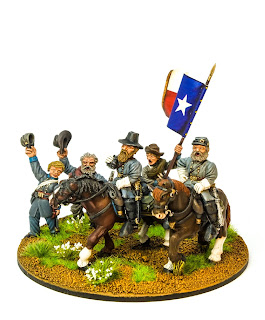 The following year at Gettysburg, his arm was severely injured as the result of an exploding artillery shell overhead. Avoiding amputation, it was though, rendered permanently useless. Severely wounded again, this time at the Battle of Chickamauga, Hood suffered a fractured femur resulting in his leg being amputated four inches below the hip(!). The surgeon sent the severed leg with Hood in the ambulance assuming he'd want to be buried with it. Against all odds, Hood survived. 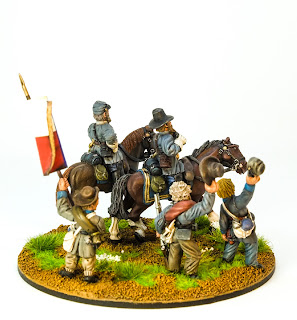 Now needing to be strapped to his horse, Hood's reputation was marred during the latter period of the war with notable disasters such as the Battle of Franklin. Working as a cotton broker in Louisiana after the war, he died of yellow fever at the age of 48 in the epidemic of New Orleans in 1879.

So the plan is to continue with the Texan Brigade (most likely the 5th Texas infantry) and mix it up with getting my Genreal Lee command base finished which has been half done and left on the desk for some months. Getting Hood's base wrapped up has given me the momentum to follow suit with the main man's.