It's been a long time since my last post. The plan had been to undergo a classic beastman/broo regiment but after making a start on a couple, I felt I wasn't feeling it. So for now that project will have to wait until the time is right.

So for now I've decided to revisit my long running Dixon Miniatures American Civil War project and have spent the last month or so on another Confederate regiment, the 5th Texas Infantry.

The 5th Texas was part of the Texas Brigade which I'm planning on painting every regiment that featured. I already have the 3rd Arkansas and a command base featuring Texas Brigade commander John Bell Hood sorted and intend to include the 1st and 4th Texas regiments plus original members, the 18th Georgia and Hampton's Legion. 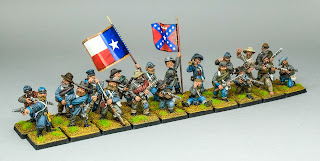 Created in October 1861, the 5th Texas were assigned to the Texas Brigade. As part of the brigade, the 5th performed well at the Battle of Eltham's Landing, lightly involved at the Battle of Seven Pines as well as playing an important roll in the Battle of Gaines' Mill with a charge that split the Union lines.

After featuring at Antietam and Fredericksburg, the 5th were heavily engaged at Gettysburg where they suffered over 50% casualties following the assault on Little Round Top. There was another heavy engagement later on in 1863 at Chickamauga after the brigade had shifted to the Western theatre, suffering significant casualties once more.

They continued to feature in prominent battles such as The Wilderness, Spotsylvania Court House, Cold Harbor and the Siege of Petersburg before the surrender at Appomattox with 12 officers and 149 rank and file which was the largest unit in the Texas Brigade.
Texans Always Move Them
"Attention Texas Brigade" was rung upon the morning air by Gen. Gregg, the eyes of General Lee are upon you, forward march." Scarce had we moved a step, when Gen. Lee, in front of the whole command, raised himself in his stirrups, uncovered his grey hair and with an earnest, yet anxious voice, exclaimed above the din and confusion of the hour. "Texans always move them." ....never before in my lifetime or since did I ever witness such a scene as was enacted when Lee pronounced these words with the appealing look that he gave. A yell rent the air that must have been heard for miles around and but few eyes in that old brigade of veterans and heroes of many a bloody field was undimmed by honest heartfelt tears. Leonard Gee, a courier to Gen. Gregg and riding by my side with tears coursing down his cheeks and yells issuing from his throat exclaimed "I would charge hell itself for that old man!"
Private Robert Campbell, 5th Texas Infantry
So the plan is to get another regiment of the Brigade underway at some point soon but meanwhile I've started work on some dismounted Confederate cavalry as I find painting regiments like a bit of a marathon.
Posted by Shaitan at 21:38